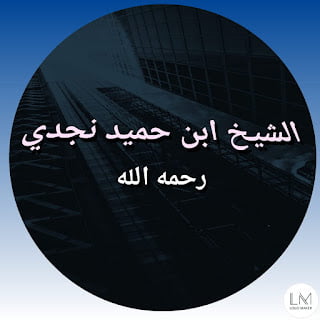 He was born in the year 1236 AH in the village of ‘Unaizah, the main village of Qassim province of Sa’ūdi Arabia’s Najd region.

Sheikh Muhammad bin Humayd grew up loving knowledge, and was a striving child from a young age, attending the circles of scholars of Ahl al_Hadith. The fact that he was from an environment full of knowledge helped him thrive and be motivated towards embarking in the search for knowledge. This was in addition to his brilliant and focused mind, excellent memory, determination, tenacity, and true intention. All of this pushed him towards dedicating himself fully to learning and immersing himself in it, not allowing anything to distract him from continuing upon that path.

He said about himself how he as a child used to attend the circles of major scholars who are mentioned in this book and how he used to attend the gatherings of recitation and Tafsir of Sheikh ‘Abd Allah bin Fayiz Aba-l Khail رحمه الله تعالى [d. 1251 AH] with some of his family members when he was still a boy of only ten:

❝I used to attend – when I was only ten – with some family members. I would fall asleep and they would carry me back to my house without me even realising.❞

Sheikh Ibn Humayd also travelled to Sham, ‘Iraq, Hijaz, Egypt, and Yemen in his quest for knowledge and learning. As for travelling to other the lands in Najd for knowledge or anything else then it isn’t known whether he ever left his village ‘Unaizah. Whilst at Damascus and Nablus he came in touch with the leaders of the Hanabilah. From them were the family of Hanbali scholars of Aal ash-Shatti in Damascus, the family of Hanbali scholars from Aal al-Ja’fari ( Hashimites) in Nablus city of Palastine. He mentioned that whilst he was in Damascus he came across many books of the Hanbali Maddhab like “al-Kawakib ad-Darari” by Ibn Zaknun [d. 837 AH] and also came across a very good library containing amazing books in Nablus which belonged to the family of scholars Aal al-Ja’fari, which they inherited from their forefathers. The Aal al-Ja’fari were a much respected Hashimi Qureshi family of scholars with ancient Hanbali roots.

The upshot of Sheikh Ibn Humayd’s life, so to speak, which he spent in seeking knowledge was that he had many great Salafi teachers, who were from different lands. From them were:

These are some of the most prominent names from Ibn Humayd’s teachers. But his teachers are certainly not restricted to those named above.

Someone else Ibn Humayd benefitted from – but was not exactly his teacher – was his contemporary and partner in seeking knowledge, Sheikh Muhammad bin Abd Allah bin Mani’ . They both studied together under the grand Mufti of Najd Sheikh ‘Abd Allah Aba-Butayn, whilst Sheikh Muhammad bin ‘Abd Allah bin Mani’ was his son in-law. It appears that Sheikh Muhammad bin Mani’ was more knowledgeable than Sheikh Ibn Humayd in Fiqh, history, and genealogy, though it was never recorded that he authored anything – as per the habit of the scholars Najd, may Allah be pleased with them, who prefer teaching, preaching, and delivering verdicts over authoring.

Here is the Shaykh’s chain of “Tafaqquh” in the Hanbali Madhhab going back to the founder of the Madhhab:

What scholars have said about Ibn Humayd:

❝Our shaykh, the scholar, the expert, the erudite, the ocean, the ingenious, the honourable, the shaykh…❞ and then went on to say, ❝He succeeded and outshined others and attained the rank of authorship…❞

2) His student Sheikh ‘Abd Allah Mirdad said about him,

❝The Mufti of the Hanabilah in Makkah, the expert genealogist, the preacher, the Imam, the teacher in al-Masjid al-Haram, the gifted and talented, the eloquent preacher. He was the rare gem of his era, a talent in the field of literature and the intellectual sciences, firmly grounded in the science of Hadith, in poetry, and the rest of the Islamic sciences. He was a man who embodied the traits of excellence. Delivering Fatwa based on the Madhhab of the Hanabilah came to total halt for years after the death of their Mufti, Sh. Muhammad b. Yahya b. Zahirah, in the year 1271 AH, until he (Ibn Humayd) took over.❞

❝The Mufti of the Hanbalis in Makkah al-Mukarramah, the Imam, the erudite, the Faqih, the Muhaddith, the masterful. He was a man of vast knowledge and comprehension, who had reached the high levels of Taqwa, an authoritative guide for the people of knowledge and Fatwa, an ardent admirer and follower of Shaykhu-l Islam Taqiy al-Din Ibn Taymiyyah and his students. He greatly excelled in the both, the transmitted sciences and the intellectual sciences.❞

❝He was a sharp jurist, possessing great memory. He travelled to different lands and circled the cities of Hijaz, Yemen, Sham, Egypt, and other lands and studied under its scholars.❞

❝He taught in al-Masjid al-Haram; a man of poems that are fine as pearls, the honourable flagbearer in Tafsir and Hadith. Mastered the Madhhab of Ahmad until he reached the pinnacle.❞

❝He strove and toiled in seeking knowledge and attaining it. He left his home in pursuit of it and circled different lands for its sake until he reached a high status and became a Mufassir, a Muhaddith, an Usuli, a Faqih, an expert author and a linguist, surpassing the scholars of his time and breaking their trend, which was to restrict oneself to the dedicated study of Hanbali Fiqh without much dedication to the other sciences.❞

After Ibn Humayd began teaching, many students started taking from him. There were those who were from Makkah and others who travelled from Najd and other areas, and Ijazat (licences for different sciences) were sought from him.

Below is a list of some of his more well-known students:

Ibn Humayd, , breathed his last on Sunday, 12th Sha’ban 1295, in the Taif and was burried in the same graveyard where ‘Abd Allah bin Abbas رضي الله عنه, is buried.

A Brief Biography of Shaykh Salih Fawzan – by Amir Al-Athari